Here's Meredith Woerner, author of Vampire taxonomy: identifying and interacting with the modern-day bloodsucker (2009), examining a vampire killing kit in Ripley’s Believe It or Not! Times Square, New York:


Woerner's not an antiquarian—she's an entertainment writer, which is why her 'examination' involves naming the box's contents and mucking about with them. However, Ripley's Times Square/Ripley's London's president—Michael Hirsch—also seen in the clip, states: 'This is the real thing. This was, uh, uh, produced in the 1850s, and it was used for travellers if they were heading into Eastern Europe. Uh, a fear of vampires if they were heading there. So, this is, this is the real, actual kit.'

So, how have these kits been authenticated? I asked the '"main" purchaser' of Ripley's vampire killing kits, Edward Meyer, how he determined their 19th century origins. He said: 'One of the key elements in a vampire killing kit is a pistol. Pistols can easily be dated by style, and maker. Some of the guns actually have dates an initials on them..From a study of several kits it is obvious some are older than others, but the guns typically come from the 1840s-50s'.

Fair enough, except an old gun in a box doesn't necessarily confirm the reality of the kit—at least, for its alleged purpose—as The Mercer Museum, Doylestown, Pa., will attest.

How about contemporary evidence? If the kits, were, indeed, sold during the 19th century, there'd likely be some record of their sale. An advertisement, something. Indeed, a Ripley's press release states, 'Most were created in the Boston area and were available by mail order.' I asked Meyer whether or not he'd seen these mail orders. 'No'.

How about a contemporary reference to their use or sale? 'No, we have nothing any earlier than 1990 mentioning their existence.' Skipping ahead, I asked whether it was possible the kits were 'late 20th/early 21st century forgeries'. He said: 'Anything is possible. I know of no hard evidence to confirm where or when any of these items were made. As I stated before the date of the guns is the only thing you can confirm with confidence…..We have found these kits in a number of different states, and three different European countries. Modern guns certainly suggest “forgeries” (your word not mine). The kits exist, they are “real”, and for the most part they are all different, so the debate isn’t really over their existence, but simply how old are they.'

But I say the debate is over their age. After all, they do exist—in the sense that such kits incorporate 19th century parts and are alleged to offer protection against vampires—but their 'existence', as antique vampire killing kits, hinges on the claim they were manufactured and sold during the 19th century. Otherwise, they're modern forgeries; 'forgeries' which are auctioned off for several thousand dollars.

A few days after my interview with Meyers, one of Ripley's bloggers—Big O—posted an entry repeating the 19th century origin of vampire killing kits under 'Weird True Facts', adding they contained 'items considered necessary fir [sic] the protection of persons who traveled [sic] into the countries of Eastern Europe, where the populace was reportedly plagued with a peculiar manifestation of evil known as Vampires.' To that blog entry, I've added my own two cents: 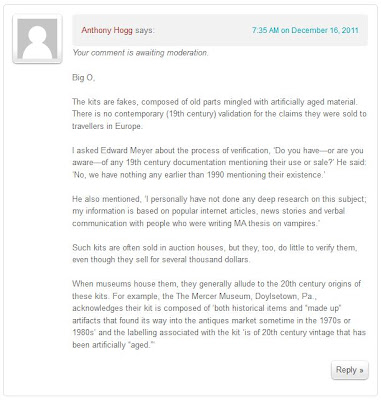 I wouldn't've done it if a commenter's 'This was proven to be a hoax' statement wasn't refuted by the entry's author: 'Not at all … as a matter of fact we are still finding out more information about these kits. Next week we have a “vampire” gentleman from the UK who is a gun expert. He is gong to examine the different guns in a bunch of the kits to ascertain the date when they were made.'
Posted by Anthony Hogg at 8:27 pm

Damn. These Ripley guys........ they are rapidly losing respect.